The Imperial Bells of China

Transport yourself back in time 2400 years and witness a truly unique and enchanting experience. Immerse yourself in history and prepare to be astonished by the beautifully crafted Ancient Bells of China. Listen to their harmonious sounds and marvel at the spellbinding traditional dancers as they take you on a magical journey of both sight and sound all the way back to ancient China.

In 1978, the 2,400-year-old bronze and stonechime-bells of Duke Zeng’s Tomb, together with a series of other ancient instruments, were unearthed in Hubei China.

Inspired by these discoveries, Hubei Opera and Dance Drama Theater choreographed the Chime Music and Dance performance bringing song, musical instruments and dance together, and puts bronze, stone, jian drum and dozens of other ancient instruments on the same stage. Through this artistic style the beautiful ancient music and dance of China are brought alive together on one stage.

The Chime of Bells, composed by Hubei Bianzhong Bell Ensemble has been recognised as a significant contribution to the heritage of Chinese music. From the earliest historical periods, particularly in ritual music from the Bronze Age onward, bells have been an essential component of instrumental ensembles in China. They were endowed with strong emotional and cultural connotation which carries on to become an aspect of progress in social belief. As a result, the bell culture developed further, they were no longer simple bells for practical uses but rather a symbol of an idea, culture and spirit. These impressive bells had been an important feature during the 11th Asian Games and 2008 Beijing Olympic Game as well as many other international cultural performances.

Imperial Bells of China: an ancient musical discovery brought to life at the Canberra Theatre 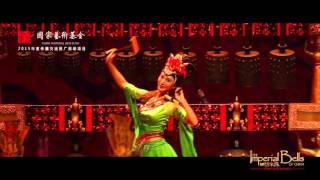